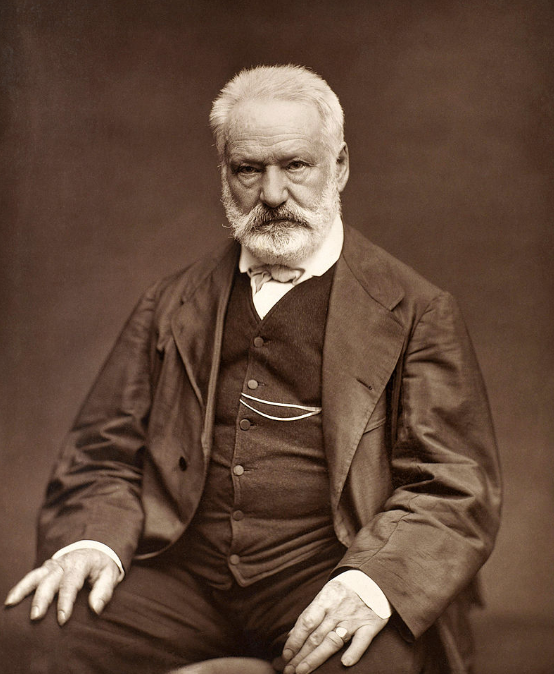 The leading exponent of French Romanticism, born in Besançon. A literary child prodigy, he received many awards. He went on to study law but dropped out to pursue a literary career. Together with his brother, Abel, he published the literary magazine Le Conservateur Littéraire (1810-21).

At a young age, he followed the conservative values of his family and was a royalist. Early on (1825), he became a liberal Romantic; he rejected neoclassicism in literature and advocated freedom in all aspects of life. His love for freedom and liberty made him a supporter of the Greek War for Independence and a lifelong philhellene – in his poetry collection Orientales, of 1829, he makes reference to the Greek War and the massacre at Chios. The publication of Greek folk songs by Claude Fauriel had a great influence on Romantic artists; it also marks the time when Hugo finally turned against monarchy.

This shift brought Hugo closer to the French Revolution of 1789; it was around that time that he wrote his famous novel The Hunchback of Notre-Dame, a portrayal of Medieval society. Before his 40th birthday, he had become a member of the French Academy, which had previously rejected him several times. The drowning of his beloved first-born daughter, Léopoldine, in the Seine was a great blow to him.

His involvement in politics, first as a senator and then as a member of parliament, started with the 1848 Constituent Assembly. But when Louis-Napoleon trampled the Constitution (December 2, 1851), Hugo turned against him and fled to Jersey, in the Channel Islands, to avoid arrest. His attacks on Napoleon III established him as a prominent champion of republicanism in France. He lived in exile for 18 years, awaiting the emperor’s fall.

In 1862 came out Les Miserables – the nineteenth century’s most widely read novel. Its denunciation of social injustice spread throughout Europe. Hugo’s philhellenism once again manifested itself when he became passionately interested in the great Cretan Revolution of 1866-69. In a letter of support to the revolutionaries of the island, he wrote: “You are right in counting upon me as a writer and as a citizen. The little that I am and the little that I can do is at the service of your noble cause. The cause of Crete is that of Greece, and the cause of Greece is that of Europe.”

He intended to write an epic inspired by Crete but the developments of 1870-71 – the French defeat by the Prussians and the Paris Commune – changed his plans, even as they changed the fate of his country. He returned and became a member of parliament again, but only briefly – he left again when the Commune was established and began advocating for a liberal republic. In 1876 he became a senator once again.

Hugo witnessed the massive historical shifts that took place over the course of a single century – from an era of liberties to the disillusionment of 1871, which foreshadowed the troubled twentieth century. He remained a lover of Greece and a defender of liberty.