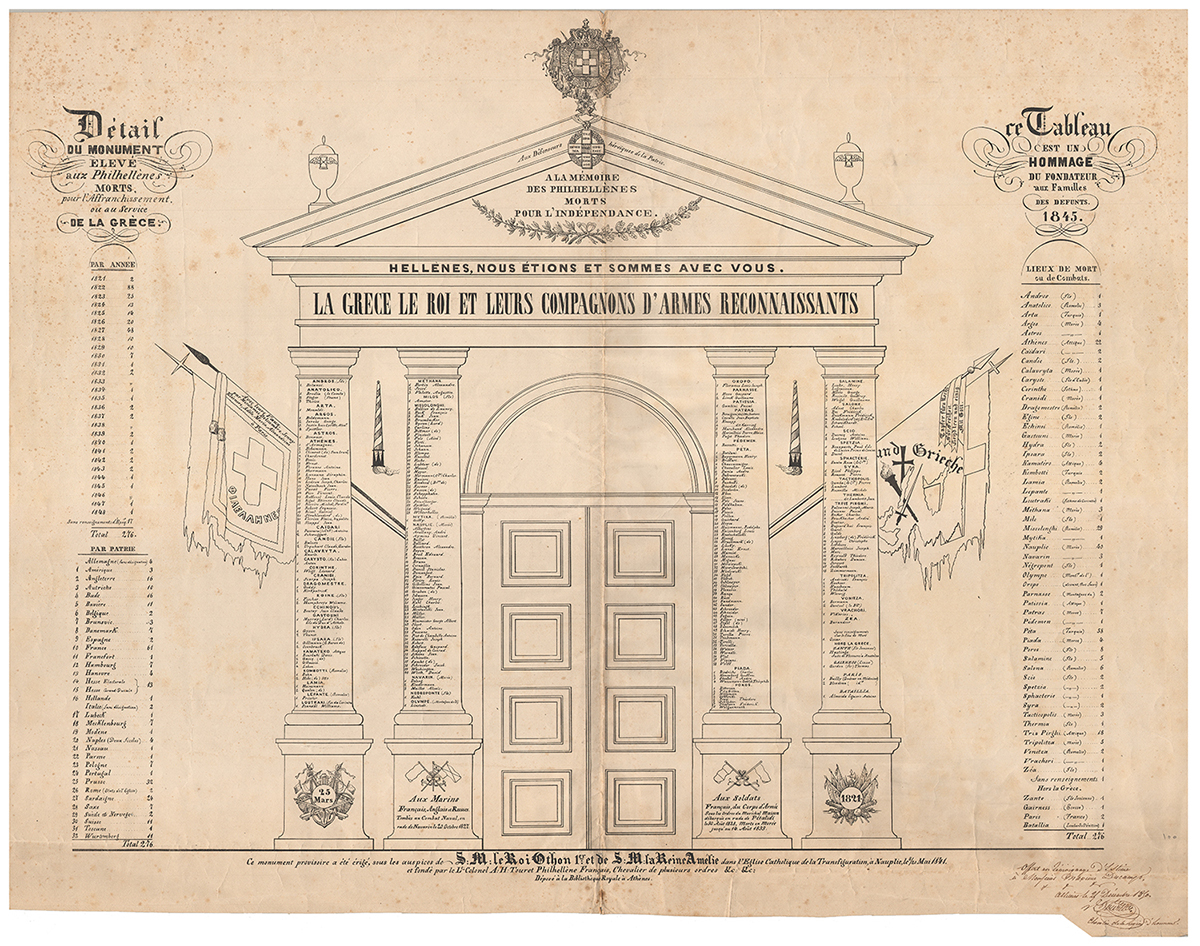 The Greek War of Independence of 1821 stirred up an unprecedented wave of support amongst Europeans and Americans.  Since the Renaissance, the Europeans admired and culturally identified with the Graeco-Roman past and were thus prepared to defend the descendants of ancient Greeks in their fight for freedom against “barbarian” Ottomans – just like their ancestors against Persians at Thermopylae and Marathon.

The philhellenic movement flourished in a number of German states and France, Great Britain, Italy, Switzerland, the U.S.A., as well as Scandinavia – as far as India, a British colony at the time. In these countries, philhellenic committees were set up to collect money, and send medical and food supplies for the benefit of the Greeks; they also published philhellenic articles in the press and helped hundreds of volunteers who wanted to join the war to travel to Marseilles and Livorno and from there to the Peloponnese, Hydra, or Missolonghi. About 1,200 young men from Germany, mainly, but also from France, Italy, Switzerland, Britain, the United States, Netherlands, as well as from Poland, Hungary, Scandinavia, Spain, and Portugal, came to fight on the Greek side. Some four hundred of them died in battle or from disease. Prominent authors and poets, such as Shelley, Byron, Pushkin, Goethe, Chateaubriand wrote fiery poems and works of literature inspired by the Greek cause; painters such as Delacroix painted heart-rending depictions of their heroic deeds; sculptors, music composers, actors, and directors produced works inspired by the Greek struggle, causing the wave of support for the Greeks to swell.

The philhellenic movement was pivotal in the successful outcome of the Greek struggle and the establishment of Greece, in February 1830, as the first independent nation state in the Eastern Mediterranean. Later efforts by Greeks in other territories to unite their homelands with the motherland, including the Cretan Revolution in the second half of the nineteenth century, attracted the interest and support of a number of philhellenes but, of course, on a smaller scale than the Greek War of Independence in 1821 had.