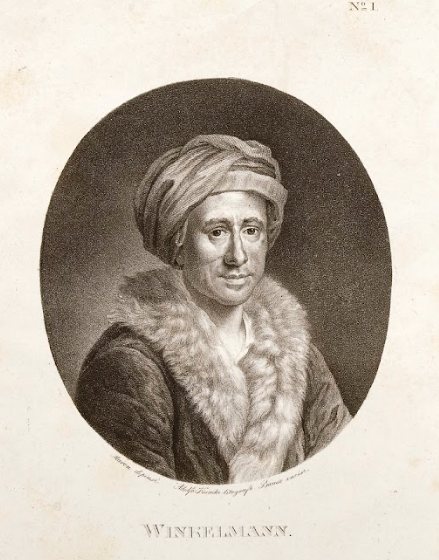 Born in Stendal, Saxony, in northern Germany, he was the son of a cobbler. He studied theology, but his love of history, especially ancient, quickly won him over. He soon became one of the most prominent antiquarians. It was in the mid-18th century, when the philhellenic movement was flourishing in the German-speaking world, particularly in the universities.

In 1756 Winckelmann published his first treatise, characteristically titled Reflections on the Imitation of Greek Works in Painting and Sculpture. In it he set out his views on the superiority of ancient Greek art and urged artists to learn from it and to try to approach it in a creative spirit, rather than sterile imitation. “The only way for us to become great... is to imitate the Greeks”, he argued. In his studies, Winckelmann freed ancient Greek art and its values from the confines of literary sources. He moreover defined an organic development of growth, maturity, and decline for the stylistic analysis and classification of ancient Greek art, thus giving new impulses to archaeological science and fresh perspectives on ancient civilisation, expanding the horizons of scholarship.

His groundbreaking views exerted great influence on both contemporary and later scholars of ancient Greek art, especially in his native Germany. Moreover, they influenced the work of many great nineteenth-century intellectual figures and philhellenes, such as Goethe, Friedrich Schiller, and Lord Byron. The impact of Johann Winckelmann’s theories on the decisive contribution of the democratic constitution to the development of ancient Greek art could be felt in the political affairs of his time and helped to inspire the French Revolution and other revolutionary movements that emerged on the European continent. “In Greece, where, after the expulsion of the tyrants, a democratic form of government was adopted, in which the entire people had a share, the spirit of each citizen became loftier than that of the other Greeks... Here the arts and sciences established themselves; here they formed their principal residence; and hence they went abroad into other lands”, he wrote.

Winckelmann is the founding father of Classical Archaeology. His History of the Art of Antiquity, published in 1764 in Dresden, is a seminal study in this field. Sadly, he met an inglorious end, murdered in 1768 in Trieste by a man of the underworld.